Bruce Piasecki has announced an annual $5,000 writing award that will be given to a social impact writer for their work covering topics on business and society.

The Creative Force Foundation Announces The Bruce Piasecki and Andrea Masters Annual Award on Business and Society Writing with a $5,000 Annual Prize.

Bruce Piasecki has announced an annual writing award that will be given to a social impact writer for their work covering topics on business and society.

The $5,000 award is in conjunction with the New York State Writers Institute, founded by Pulitzer Prize-winning author William Kennedy.

The recipient must be between the ages of 18 and 35 and have at least one previous publication whose work addresses issues such as climate change or a solution to racial and gender equality.

“Our goal is to foster a new generation of writers interested in pursuing these underserved themes,” said Bruce Piasecki.

Applicants must submit their work by August 15, 2022. The winning recipient will be notified prior to the ceremony.

The $5,000 award will be presented to the winner in person in September 2022 at the New York State Writers Institute by international bestselling author Jay Parini.

Piasecki has been an advocate for reinventing the Environmental Protection Agency, served on the EPA’s Executive Advisory Council, and was appointed to the White House Council on Environmental Technology during President Clinton’s administration.

He is the author of multiple books, including the New York Times and Wall Street Journal bestseller, Doing More with Less: A New Way to Wealth. Recently, Piasecki penned New World  Companies: The Future of Capitalism. 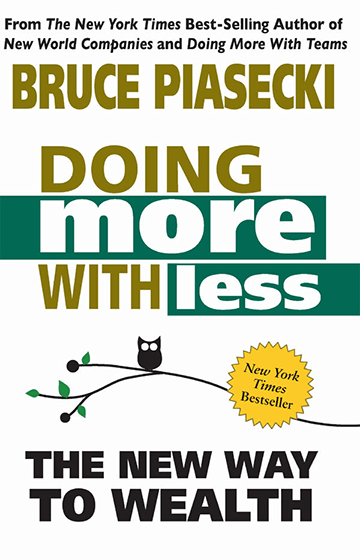 “Although we all remember how we started, this creative world—and your effectiveness in it—we can feel lost or repressed as we become more professional. The joy of youth decays into the weight of adulthood for many. But we can remember our first sense of being competitive in a different way and go back at it again and again, each day. This primal self of invention and frugality allows new growth, even in mature adults. Doing more with less is success.”

— from Doing More With Less: The New Way to Wealth

Dedicated to his environment and community, Piasecki contributes through a family-based community trust called “Creative Force Foundation.” Since 2007, his book on globalization, World Inc, has appeared in ten foreign editions, including Japanese, Korean, Italian, and Greek.

“It has the energy one expects from Bruce Piasecki, an author with a sharp wit, deep learning, and a broad perspective on the world.”

Due to his outstanding efforts in the field, Piasecki was honored for his lifelong achievement by being elected to the Lotos Club in Manhattan, as well as the National Press Club. His work has been featured in the Los Angeles Times, the Baltimore Sun, and MIT’s Technology Review.

Recent works include Times Union and Trolley (NYS Writers Institute) excerpts from Conquering Tomorrow Today, with a chapbook called The Quiet Genius of Eileen Fisher, published in 2020. Piasecki is currently working on an update of World Inc called Wealth and the Commonwealth, expected in 2021.

Over the years, Piasecki has run tenured professional educational programs and degree programs at Cornell University, Clarkson University, and Rensselaer Polytechnic Institute. At RPI, he was one of the first to develop a Master’s of Science degree in Environmental Management and Policy, with award-winning students from around the world.